Heh, Hans Rosling did it again… fascinating stats and explaining world’s population growth (the big fill-up) with some leftover boxes.

Reading the Wikimedia blog I stumbled over this interesting post. They mention a framework called Ushahidi (Swahili word for “testimony’) with its subproject SwitfRiver which can be used to track and verify the reliability of news concerning current trending topics, possibly helping editors of Wikipedia to enhance the quality.

Digging into I found out the framework is used for live mapping (collection, aggregation and visualization) of disaster and event related messages sent via all different kinds of transports (e.g., twitter, facebook, email, sms…). One example is the 2010 Haiti earthquake. Where it helped to coordinate all the s&r teams.

As I find it quite fascinating how much people who sit at home in their living rooms might be able to help others in a disaster region, I’d like to suggest this talk:

Today when I attended a talk at LWA 2010 I remembered a nice talk about beautiful data visualization by Hans Rosling, that I want to share with you (it’s worth the time):

When I searched for this talk I also came across the follwing two, the one above is a must, if you liked it, you might want to invest more time with these:

And last but not least another nice talk in this area, this time by David McCandless:

Today I was asked how to generate Recall-Precision diagrams including the f-measure values as height-lines from within python. Actually Gunnar was the one who had this idea quite a while ago, but constantly writing things into files, then loading them with his R code to visualize them, made me create a “pythonified” version. Looks like this (click for large version): 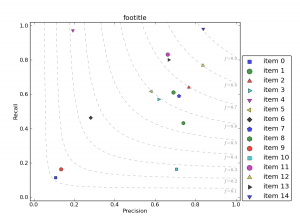 Here’s my python code-snippet for it: recallPrecision.py.

Uses a bunch of pylab internally, but after simply importing this module, you can easily visualize a list of (precision, recall) points like this: